The Berkeley Schools Excellence Program (BSEP) funding is up for renewal November 8. BSEP is currently responsible for twenty percent of the Berkeley Public Schools’ total funding.

Since 2006, when Measure A first passed, adding the BSEP fund into the BUSD system, Berkeley homeowners have continuously paid twenty percent higher taxes for schools than in the past. If the renewal proposal passes in November, the taxes would continue at the twenty percent increased rate.

The majority of BSEP funds go to reduced classroom sizes. For this reason, in effort to have more teachers, the measure pays thirty percent of BUSD teachers’ salaries.  A large portion of the fund goes directly to schools where a council decides how to allocate the money. BSEP also  provides the sole funding for all libraries. Maria Travillian held her first back-to-school supplies giveaway on August 14. The event, at San Pablo Park in South Berkeley, welcomed all children and families.

Travillian, along with her family, friends, and other community volunteers, set up piles of school supplies, intended for all ages, on park picnic tables.

Travillian, the organizer of the giveaway, graduated from the Berkeley Unified School District seven years ago.

Growing up, she attended Longfellow Middle School as well as Berkeley High School.

After graduating from University of Las Vegas with a degree in Mass Communications, she moved to Fairfield, California.

Today, Travillian works as a store manager of Tuttimelon while taking classes at Solano Community College.

Travillian grew up with all of the necessary school supplies; however, when her daughter started school, she noticed large numbers of students who did not have the same luxury.

“Lots of kids didn’t have basic things they needed for class,” she said.

Travillian’s observation coupled with her eagerness to help the community sparked her idea of organizing a school supplies drive and giveaway.

She began by posting her idea on Facebook to survey interest.

After receiving several immediate responses, Travillian set a goal of helping one hundred students receive the school supplies necessary for the upcoming school year. She started a GoFundMe page to raise money and set up drop-off dates and locations for people to donate supplies in person.

In one month, Travillian raised $1,050 through the GoFundMe webpage in addition to several donated supplies.

“I didn’t expect this many donations, but I’m feeling great about it,” she said, describing her experience with the first school supply giveaway. in BUSD. Alexandra Provence, a BHS librarian, fully supports the measure.

“This is my tenth year working in Berkeley, and the support and generosity of our community continues to impress me.

She added, “Naturally, I support the bond since it is where 100 percent of our library funding comes from,” said Provence.

Provence imagines that without the funding provided by BSEP, there would only be one librarian for both the BHS main library as well as textbook management.

“The robust program we are able to offer teachers, students, and staff would certainly take a devastating blow. It would not be a program I would want to offer my own children,” Provence said.While the measure has broad support from those in Berkeley, with no argument filed against its renewal, some bring up the inequality that arises between richer and poorer communities when individual cities are left to finance a large portion of their school system. Others say state school funding is not adequate and must be subsidized with local dollars.

Poorer communities with fewer resources are left with only what the state has given them and little else, while other communities like Berkeley, which can afford an additional tax, thrive despite the inadequate funds that they had been originally granted.

George Rose, a teacher of English and drama at Willard Middle School, stated that while he completely and  wholeheartedly supports BSEP, he wishes that the solution would be for Californians to support all schools using creative ways to fund them.Gaurav Ghosal, BHS sophomore, has been elected to represent and vote on behalf of Berkeley High at BSEP meetings. Ghosal said,“It is important to think of BSEP as an investment into the future.”

Meanwhile, in San Pablo Park, dozens of families stood in line to collect supplies for the start of a new school year.

Nicole Cox, a mother of three receiving school supplies at the giveaway, was tearful when speaking of her appreciation for the volunteers of the event.

Cox described that each year in August, she searches the internet for donations and giveaways of school supplies for her children. However, Cox heard of the San Pablo Park event through a neighbor, as she and her family live across the street from the park.

“It just really helps us out to have things like this,” she said.

According to a data analysis study conducted by the BUSD Board of Education, in 2014, 38 percent of students attending BUSD schools came from economically disadvantaged homes.

A friend of Travillian as well as a volunteer at the event, Jhamaria McCrary, helped in passing out supplies and organizing the giveaway.

“I feel inspired by all of this,” McCrary said as she passed out notebooks and writing utensils.

Like Travillian, McCrary grew up in Berkeley, attending BUSD schools. According to McCrary, she often played in San Pablo Park throughout her childhood. “It’s so nice to be back here doing something good for the community,” McCrary said.

Travillian has received many donations since the first drive, and hopes to organize more events due to the success of the first one. 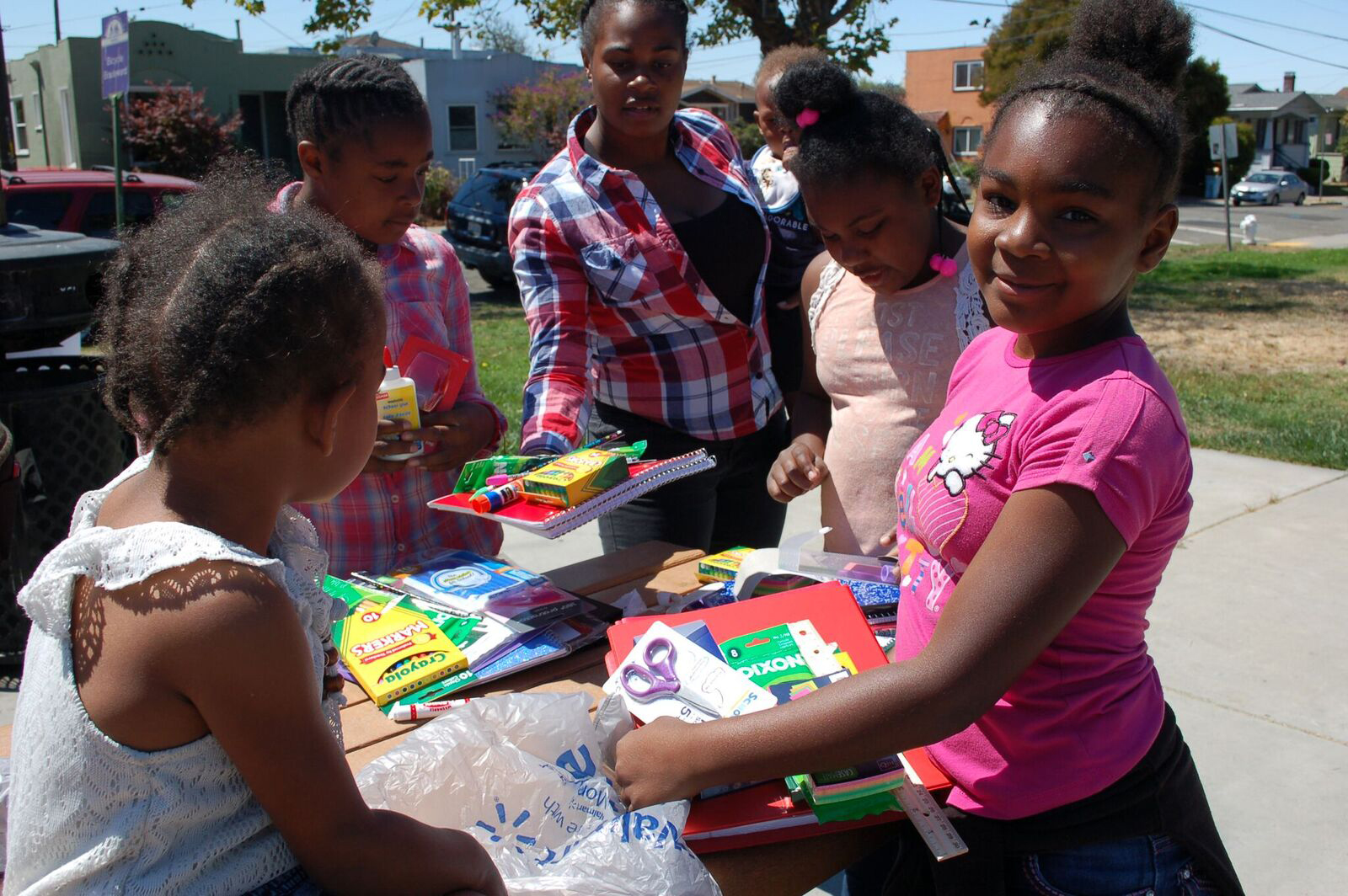