Students running for Associated Student Body (ASB) elected positions gathered to give prepared statements and answer questions from delegates sent from history classes at the 2019 Election Convention. The convention was held in the Florence Schwimley Little Theater during periods one through three on Tuesday, February 26. This year has the largest number of candidates in recent years, with around seventy students running for different positions.

The Chief of Publicity position is the most competitive race. The shared goal of the majority of the candidates is to make Berkeley High School (BHS) students interested in the announcements. For example, Anna Orebic performed a song in which she joked, “Ms. Schweng is actually my best friend, we do legos on the weekend,” and brothers Gavin and Sebastian Jeanes wore matching Star Wars onesies and performed a themed speech. Candidates were asked what their tagline would be, and Remy Djavaherian would start with “hey party people,” and end with “get groovin, stop snoozin,” while Jake Jandra’s tagline would be “let’s get this bread,” and may add in the daily weather or karaoke on Fridays. Other candidates brought up diversity over the announcements, such as Evan Curl and Yasmeen O’Brien, who brought up the fact that there hasn’t been a female Chief of Publicity since the 2016-17 school year, and Nathan Gelobter and Marie Johnson, who would allow students to promote their own events over the announcements.

Many of the candidates for ASB President brought up expanding students’ voices. “Just because you’re a student, doesn’t mean you don’t have a say in things,” said Mailene Guerrero. Expanding on other plans, Teoman Tezcan, plans to throw parties every month, and said, “you can always retake a class, but you can never relive a party.” In a similar vein, Evie Berg, running for Vice President, promised two rally days. Lexie Tesch and Daijah Conerly, running for President and Vice President respectively, plan to implement a simple supply center, where students in need can get basic necessities like toothbrushes and socks.

The three candidates for school board are Dylan Goetting, Estella Hemp, and Bennett Thompson. Goetting plans on increasing funding for field trips, while also providing more support for students struggling with nicotine addiction. Thompson promised to make sure students voices are heard, by relaying student concerns to the school board. Hemp’s goal is to “bridge the gap between the school board and the students,” and she added that she has made personal connections with many school board members already.

There are also only three candidates for Chief of Service. In addition to running the holiday meal, the main task for Chief of Service, all candidates brought up other plans. Seraphina Joseph plans on soliciting food and clothing donations year round, and Ella Du wants to “ensure that people who need our services are aware of them,” in addition to recognizing students who did exceptional amounts of community service. Mia Stein said she will “diversify the types of community service offered at BHS,” possibly by starting a pen pal program with children at Oakland Children’s hospital.

“Our community is our greatest resource,” said Sofie Ledor, running for Vice President with Sophomore Presidential Candidate Riya Jivan, when speaking about methods of improving BHS. Other candidates also emphasized this idea, such as Tenzing Chosang and Evan Kleinhans who want to focus on unifying the Small Learning Communities, while also including representatives from minority caucuses in monthly meetings. Yael Kelly promises to “make kindness one of the core values of BHS.”

The Junior Class race for president focused on improving mental health for the notoriously stressful junior year. “Stress limits what you can do inside and outside the classroom,” said Lyndon Ward, and Rohini Chokkalingam added that she wanted to “promote self care and extend mental health resources from the health center.” Emma Shamir and Kahtya Cherney focused on communication, not only between students and teachers, but also between the student body and their elected representatives in leadership. Enzo Ferrari considers lack of motivation a pressing issue, and wants to create exciting activities to keep people engaged.

The presidential candidates for the class of 2020 are all in Academic Choice, and many focused on increased community input. “Good ideas don’t come from one person, they come from the community,” said Ari Libenson. Similarly, Daphne Eleftheriadou stated, “it’s not fair that our voices are the only ones being heard when making important decisions.” Avaani Kataria plans on being a “voice for underrepresented students.” As other ways to improve senior year, Satchi Metaxas and Jack Egawa are planning a roaring ´20s theme for prom, while also being advocates for equality between mens’ and womens’ sports teams at BHS.

Over the course of the campaign, some candidates began to notice a pattern of their posters being defaced and torn down. Tesch and Conerly said they found their posters “crumpled up, torn down, and put into urinals.”

Tesch said, “We don’t understand what they are gaining from it, and wish they would respect our campaign.” Conerly said that the disrespect made her think that she “wasn’t good enough to be running with everyone else.” Although posters from different candidates have been taken down, Tesch said she felt theirs “seem to be the only ones being so brutally ruined.” Despite the adversity, Tesch and Conerly are focusing on the campaign. “Although there are some people trying to bring us down, we are choosing focus on the positive,” Tesch said.

Disclaimer: Multiple members of the Jacket staff are candidates in this year’s election. 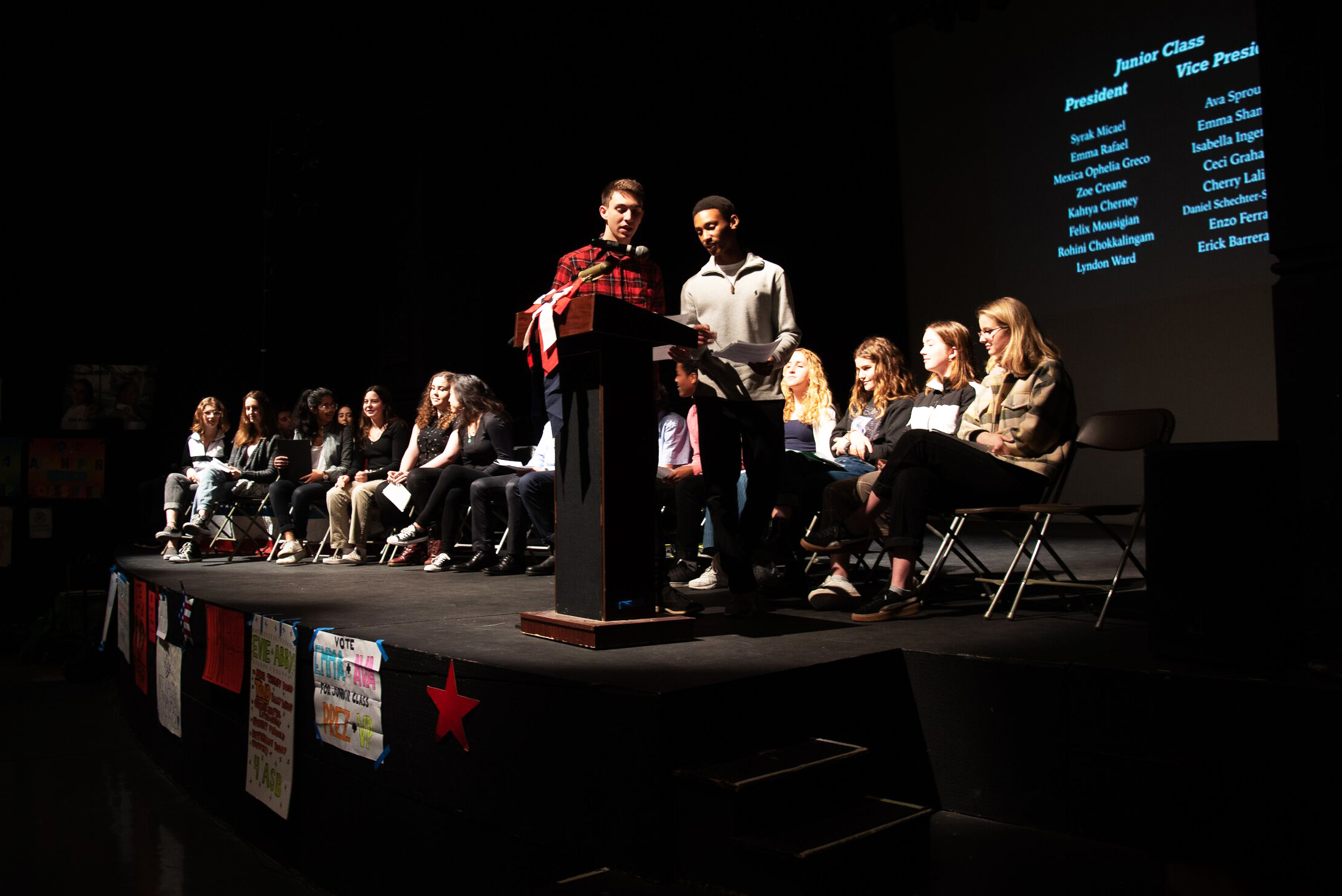