Why did the newt cross the road? To get to the breeding pools, of course.

And because the road in question — South Park Drive in Tilden Regional Park — is dangerous to the newts, it will be closed to car traffic from November to April to protect the thousands of migrating newts that will cross it this year.

“We’re really trying to cover newt mating and migration seasons — the times when they’re going to and coming from the pools,” said Sara Fetterly, Tilden’s Supervising Naturalist. “They’re a sensitive species when migrating,” she continued.

The California newt, a type of salamander five to six inches long with brown on top and orange on its underside, is not officially endangered. However, it has been deemed a “Species of Special Concern” by the California Department of Fish and Wildlife, and harm to newts is punishable by state law.

Bicyclists and pedestrians are still allowed on South Park Drive, but are advised to go slowly and watch out for the newts, which blend in easily with the ground. Dogs are allowed on and off-leash, provided they are under voice control, but must be kept away from newts, which have a toxic substance on their skin.

“We are doing what we can to help protect these tiny, slow-moving park residents,” said Tilden Park Supervisor Sergio Huerta in an East Bay Parks statement.

There has been controversy surrounding the road closure in the past: a group of nearly fifty dog-walkers took their concerns to an East Bay Parks District board meeting in 2013, arguing that the “Leash Required” signs the district put up were outside its jurisdiction. The dog walkers wanted their dogs to get good exercise while walking on the road, and said that bicycles should be banned on South Park Road instead. In recent years, dogs have been allowed off-leash on the road, but some still argue that neither the bicycle speed limit nor dog control requirement are enforced.

The closure of South Park Drive is nothing new: In 1989, a UC Berkeley study revealed that the road cuts directly across the migration path of the California newt. Meanwhile, park staff saw the impact the road had on newts first-hand and went to the Tilden Board of directors.

“Naturalists saw so many newts killed on the road, they decided to do something about it,” said Fetterly.

The park district began closing the road every winter, and the seasonal closure has continued for almost twenty years. In years such as 2012, early rainfall started newt migration before the usual road closure date, and citizens lobbied for an extended closure. This year, no such lobbying occurred.

However, David Wake, UC Berkeley Professor at the Graduate School of Integrative Biology and Curator of its Museum of Vertebrate Zoology, has said that the closure dates are a poor compromise that kill many newts early in the season every year, not just in years of early rainfall.

“[Newts’] movement patterns are not governed by human calendars,” said Wake on a neighborhood listserve. He continued, “The closure of the road should be extended for two weeks on either end. I have made this case for many years, unsuccessfully … The tragedy of the newts is that in most years their breeding is completely unsuccessful.”

Unfortunately, the newt population has gone down in recent years, in part because of infection by the deadly chytrid fungus.

According to Fetterly, an important way to help keep newt numbers stable aside from watching out for them on South Park Drive is to provide them with habitat — the seasonal pools they need to mate in winter, the chaparral and hollow logs they live in during summer. Newts, like all amphibians, are “indicator species” for climate change, meaning their wellbeing tends to reflect the condition of the ecosystem as a whole.

When safely across South Park Drive, the newts will enter the breeding pools, perform courtship dances, and mate. The female newts lay seven to twenty eggs each, and the baby newts hatch in midsummer.

After they leave the water and lose their external gills, this new generation of newts will cross South Park Drive just as its predecessors did, hopefully navigating to the breeding pools unhindered. 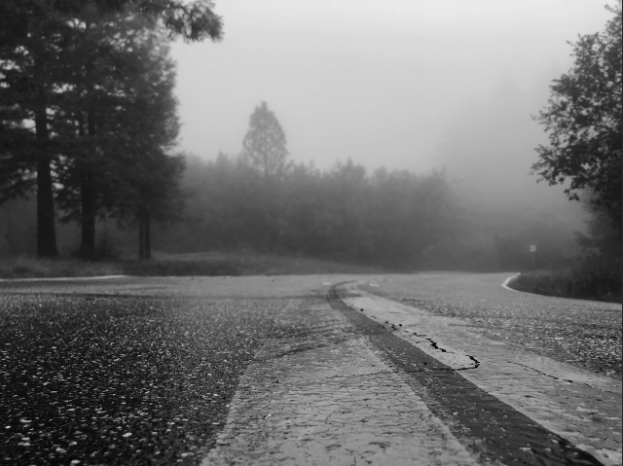