Amber Whitson greeted me when I arrived at the community of vehicle dwellers on Eighth Street. Amber coordinates the group, called Berkeley Friends on Wheels. They got their start in an empty lot in the Berkeley Marina where people parked RVs and pitched tents. People parked there because it was convenient not to have to move all the time to comply with parking laws and complaints from neighbors. From there, Amber says how “we  got to know each other gradually over time.” When the city evicted them from the lot over a year ago, citing a construction project, Amber and her neighbors vowed to stay together. They moved to a parking lot down the road from their previous site, where they stayed for two months before the city forced them to move again. “The only construction they did where we had been was to put up concrete barriers to prevent anyone from parking there.” 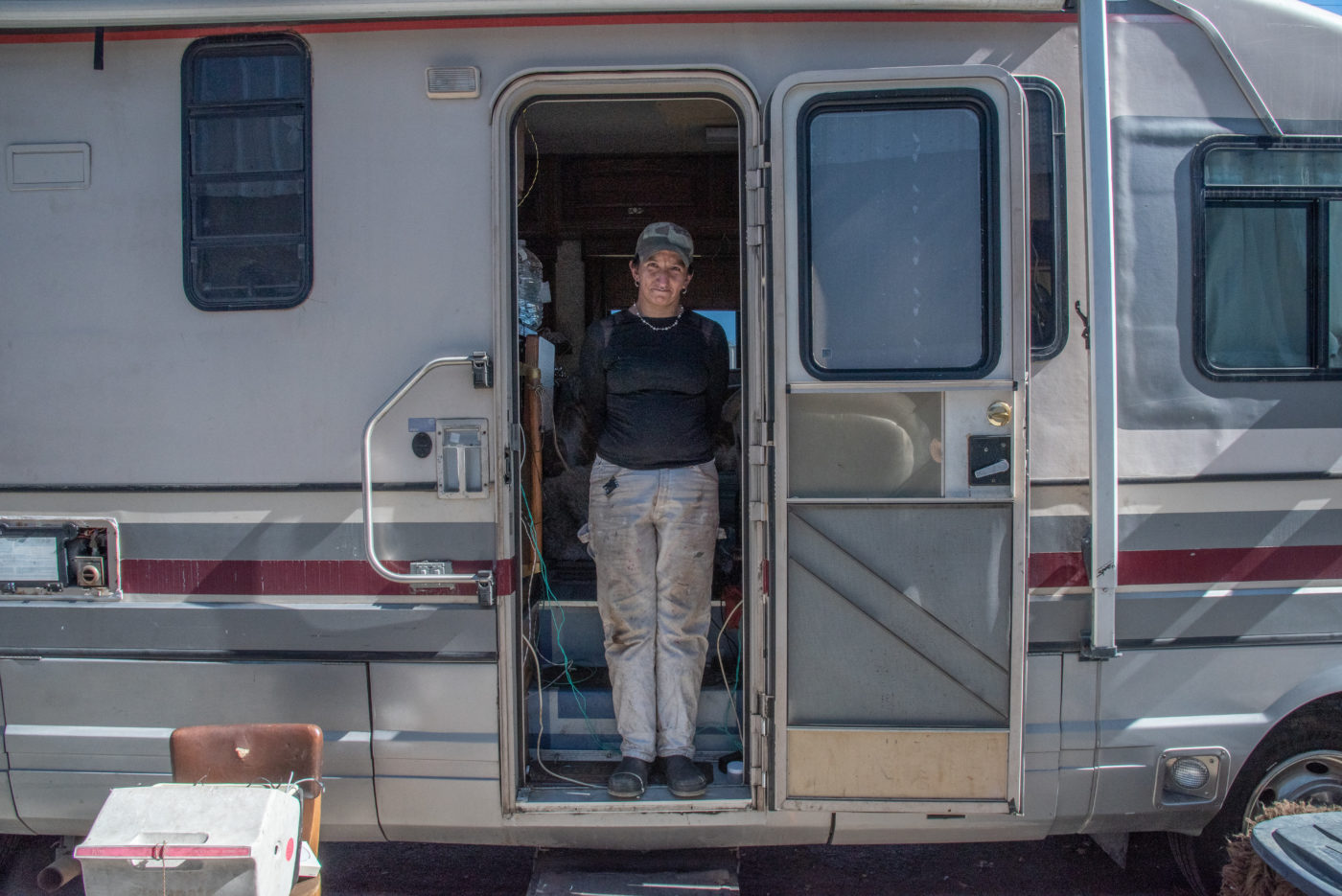 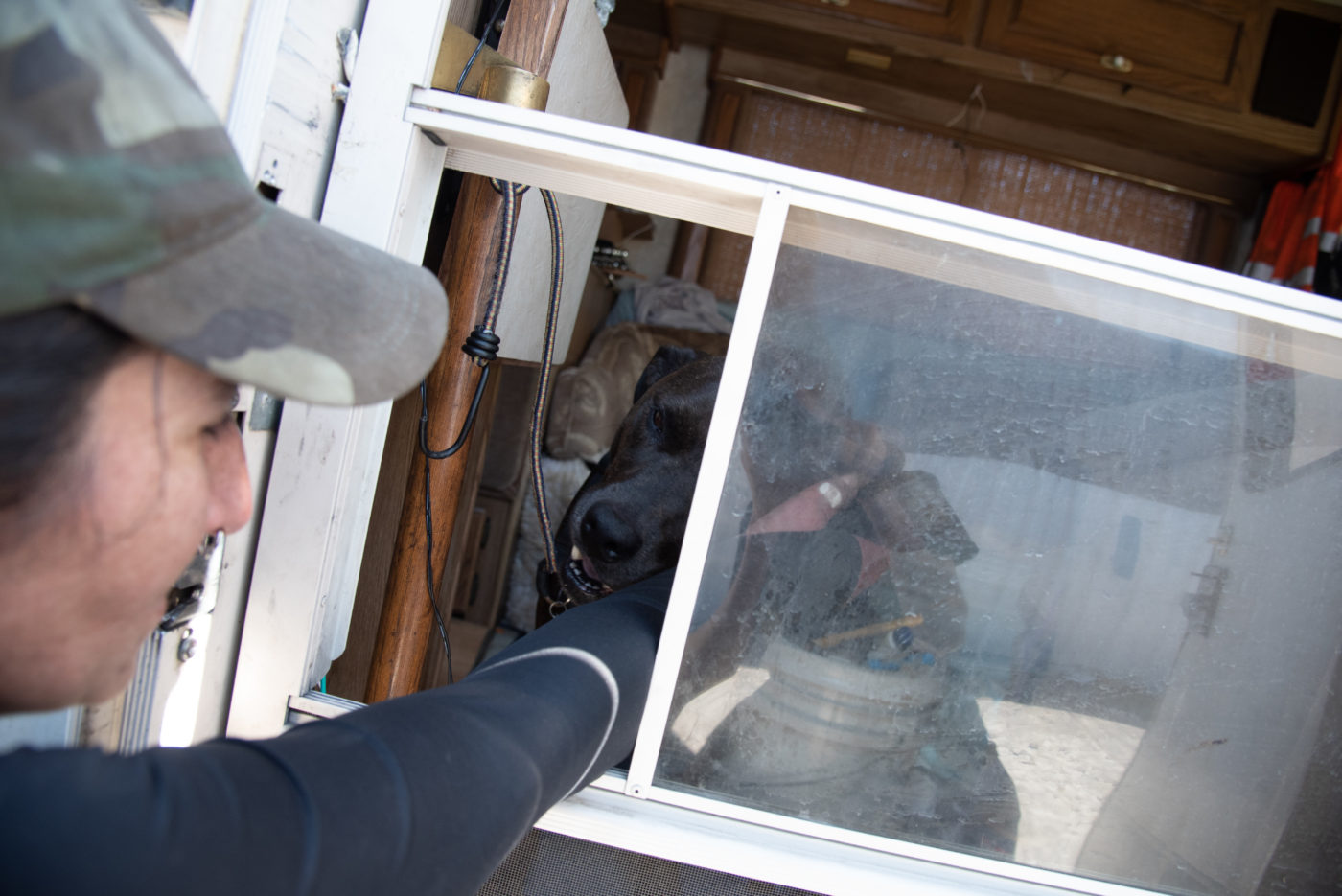 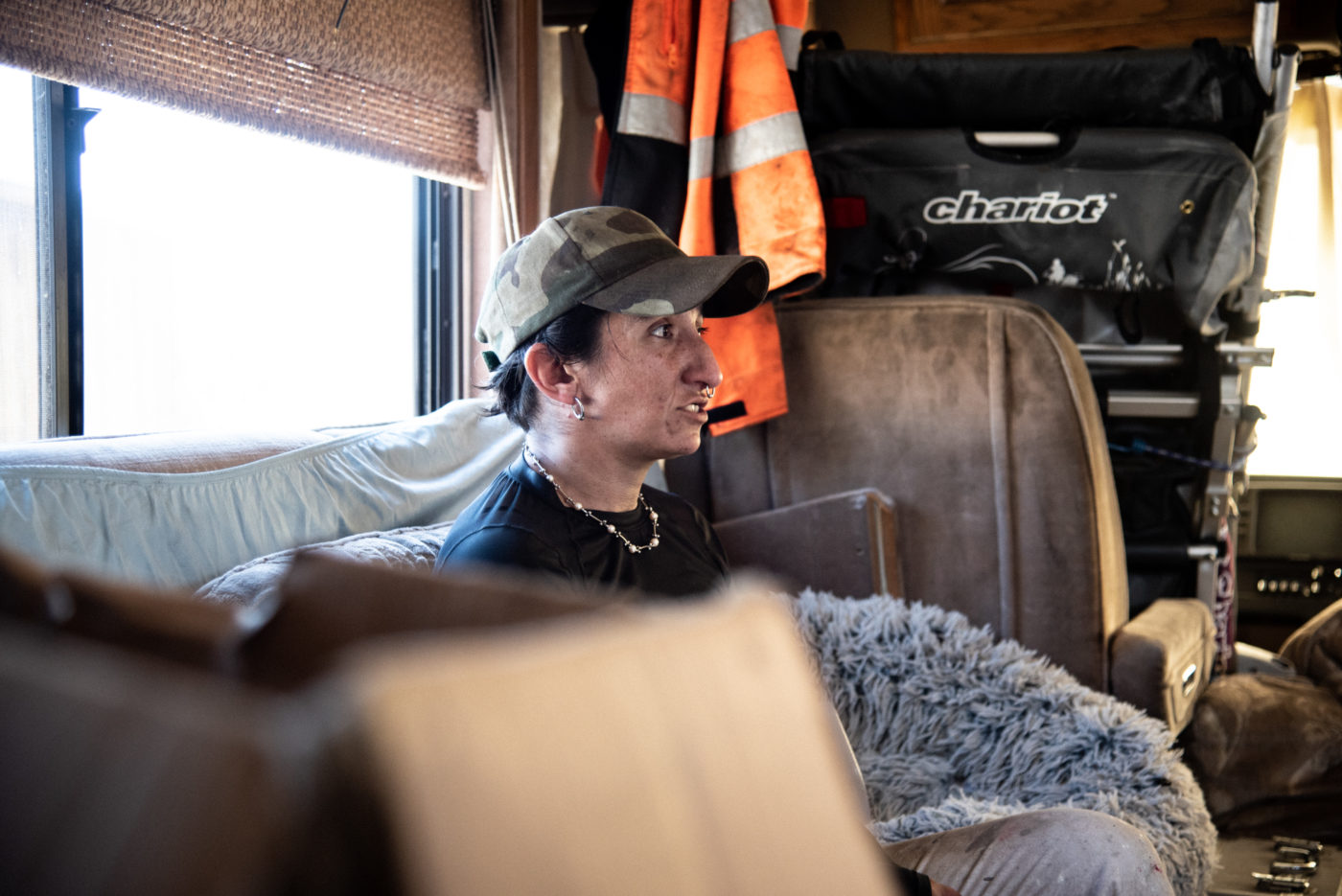 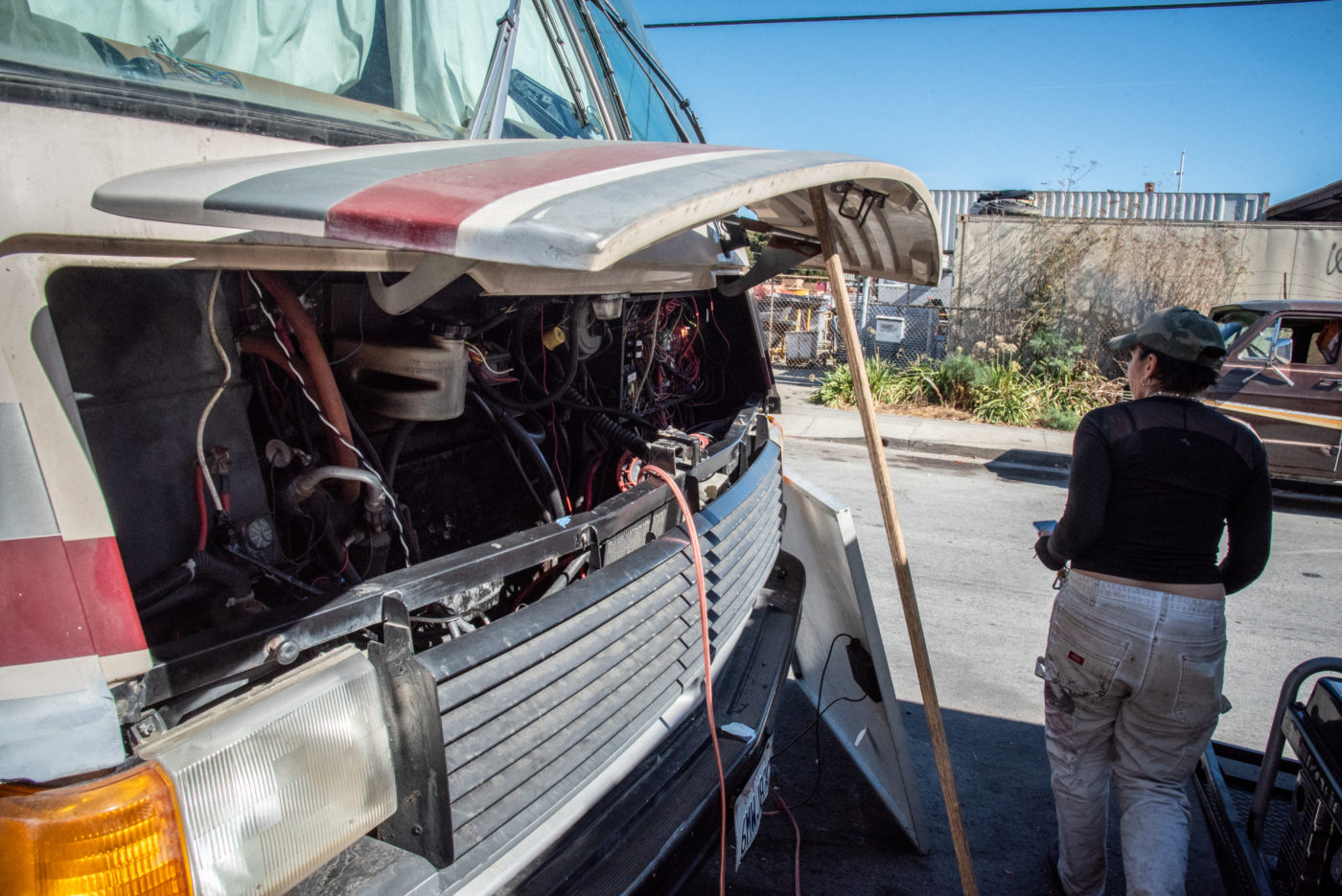 The group has now been parked on Eight and Harrison for almost a year. “All the people that are members of our community, we’ve all signed agreements, kind of code of conduct agreements, good neighbor policies and whatnot.”

Amber was born in Santa Monica, where she lived until she was 16. She left with the ambition to travel and see the world: first stop Seattle. Unfortunately she didn’t make it past Berkeley. “The Berkeley vortex got ahold of me, and I’ve been here ever since.” She later was able to visit Seattle for a few hours. She says that she wouldn’t leave the Bay Area “unless it was to go to Oregon.” “I like the colder climate and the wetter weather. I like wet weather.” She has three dogs. “The little screechy one is Bit, the old scruffy one is Little Guy and the big black one is Derby.”  She works as a mechanic with her boyfriend, Chris. In addition to repairing the vehicles in her community, she does paid work for clients around the east bay. Recently, she has been working on Berkeley Free Clinic’s van. I interviewed her inside one of the RVs she’s fixing. Chris’s mother found the vehicle on her property in Clearlake and drove it down for him. She has lived in an RV since 2014, when dozens of homeless encampments were controversially evicted from the Albany Bulb, putting an end to years of art and community at the former landfill.

“It's the same [modus operandi] everywhere: Make more money and kick out the people who can't afford to pay the insane rents.” – Chloe Verron

Chloe Verron lived in her RV for five years before the City of Berkeley towed it away one morning because her registration was expired. “I was still inside sleeping. The only reason I  woke up was because I heard Yesica [shouting].” “[The police] didn’t bother to knock on my window.”

After the incident, “Yesica [was] nice enough out of the kindness of her heart to let me live with her.” Before she became homeless, Chloe rented a house in Lake County, near Mendocino National Forest, after moving from a stressful computer programming job for design firm Curran & Connors in New York.

Even with generous discounts offered by the city’s impoundment lot, the cost to recover Chloe’s vehicle is upwards of $5,000, and the RV is likely to be auctioned before she can pay the fine. Chloe believes the Kelly Blue Book value on her RV was nearly $20,000 when it was taken. She says that she doesn’t have the money to pay the fine, and she doesn’t feel comfortable asking her family for the money. “They look at me like I’m crazy.”

For most of her life, she lived with undiagnosed bipolar disorder, which she is now receiving treatment for. Some days are better for her than others. She spoke to the Jacket on “a good day where [she’s] able to be in front of people and talk more.” She uses a stuffed elephant named Mr. Elephant to stay calm in stressful situations.

While she says that she’s not as politically active as her roommate Yesica, Chloe has her own strong opinions about the housing crisis in the Bay Area, and occasionally attends city meetings on the matter. She hopes that “[the politicians] will figure something out that will that will help more people because it’s really a shame to see what they’re doing now.”

“Saying not in my backyard doesn’t work here because it could happen to you too. It could happen faster than you think. I used to make a lot of money doing computers. It’s not a matter of people being lazy or being dirtbags or being drug addicts. That’s not the only people who end up in this situation. You end up with people like Yesica and myself who are normal people, who are good people.”

When asked if she would leave the Bay Area if she could, she said that she has the means to, and that she doesn’t have any ties, no vehicle, no dog or kids. The only things keeping her here are “[the] people that I know, the great weather, the culture here, and you know, why do we have to leave because we don’t make enough money? 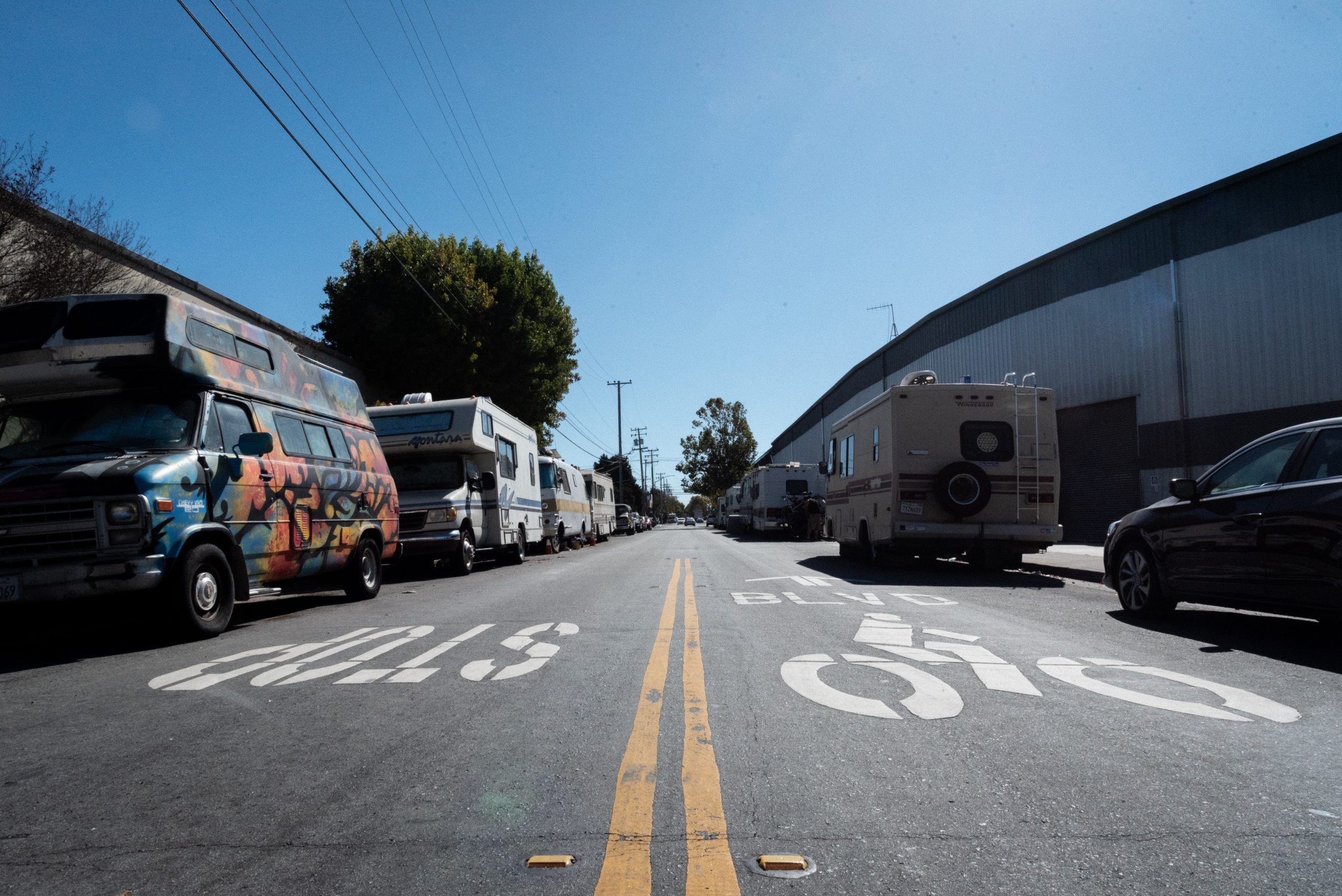