On November 9, 2016, five senior athletes going on to play varsity sports in college signed their letters of intent on early National Signing Day surrounded by friends, family, and coaches in Berkeley High School’s library. About ninety people were present at the hour-long celebration. The event started at 5 PM when coaches and the athletes took turns to speak about either watching their mentees grow into becoming a talented sports player, or about their experiences playing and developing their skills at BHS. Around 5:30 PM, the five finally signed their letters, cake was served, and the attendees finally had the chance to mingle with them.

The all-female quintet, Xinavane Foreman (California State Fullerton), Mikaela Hammond Holland (University of Massachusetts Amherst), Isabella Marshall (UC Berkeley), Robyn Wampler (UC San Diego), and Roxanne Wiblin (University of San Diego), play basketball, crew, crew, softball, and volleyball respectively. With bright smiles and happy demeanors at the signing, one can reckon that the seniors feel fortunate and ecstatic to commit to playing their sport at their chosen college. All of them committed at different times. Foreman committed this past September, Marshall this past August, and Wampler last December. Many colleges were considered by the athletes, including University of Pennsylvania, UCLA, and Brown University.

All the accomplished players had a criteria in common when deciding on what college to commit to, which was the coaching staff of the institution. Marshall said one reason she picked UC Berkeley was the coaching staff.  “The coaching staff and athletes really struck me as hard working and just awesome people,” said Marshall. In addition to that component, Wiblin mentioned her college’s location, while Wampler remarked about her school’s academics. Along with liking the programs, campus, and crew team, Hammond Holland chose her institution because her family lives roughly an hour away.

When asked about what they felt right after signing their letters of intent, Wampler said, “It was a great feeling. I knew that all of my hard work paid off and I was officially going to play collegiate softball, which has been a dream of mine since I was a young girl.” Wiblin similarly said that she felt glad to officially earn something tangible after being consistently devoted to her sport since she was little. Slightly anxious but thrilled nonetheless, Hammond Holland said, “I felt really excited and a little nervous and scared. I just signed away the next four years of my life, but I’m really happy about it.” She then went on to say that signing felt like a weight off of her shoulders, since she really wanted to attend the University of Massachusetts Amherst.

Goals for the athletes in college range from getting a consistent starting spot on the roster, setting the bar high freshman year, and going as far as they can in the NCAA championships. For Foreman, it’s becoming a very accomplished and successful basketball player in the next few years. Foreman said, “I hope to take my basketball career to the next level and become one of the top players in the Big West Conference and win some championships!” 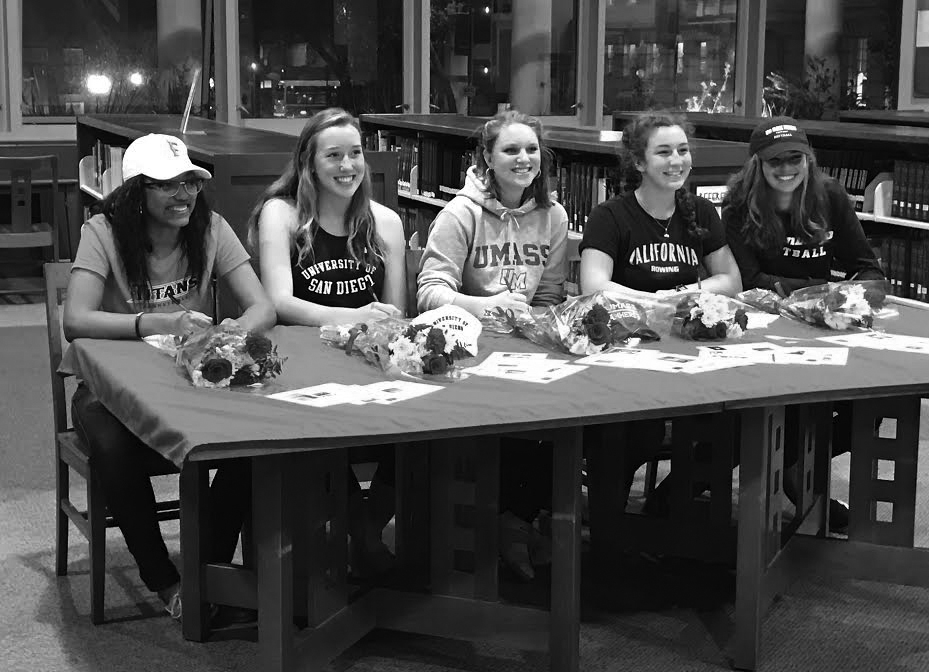