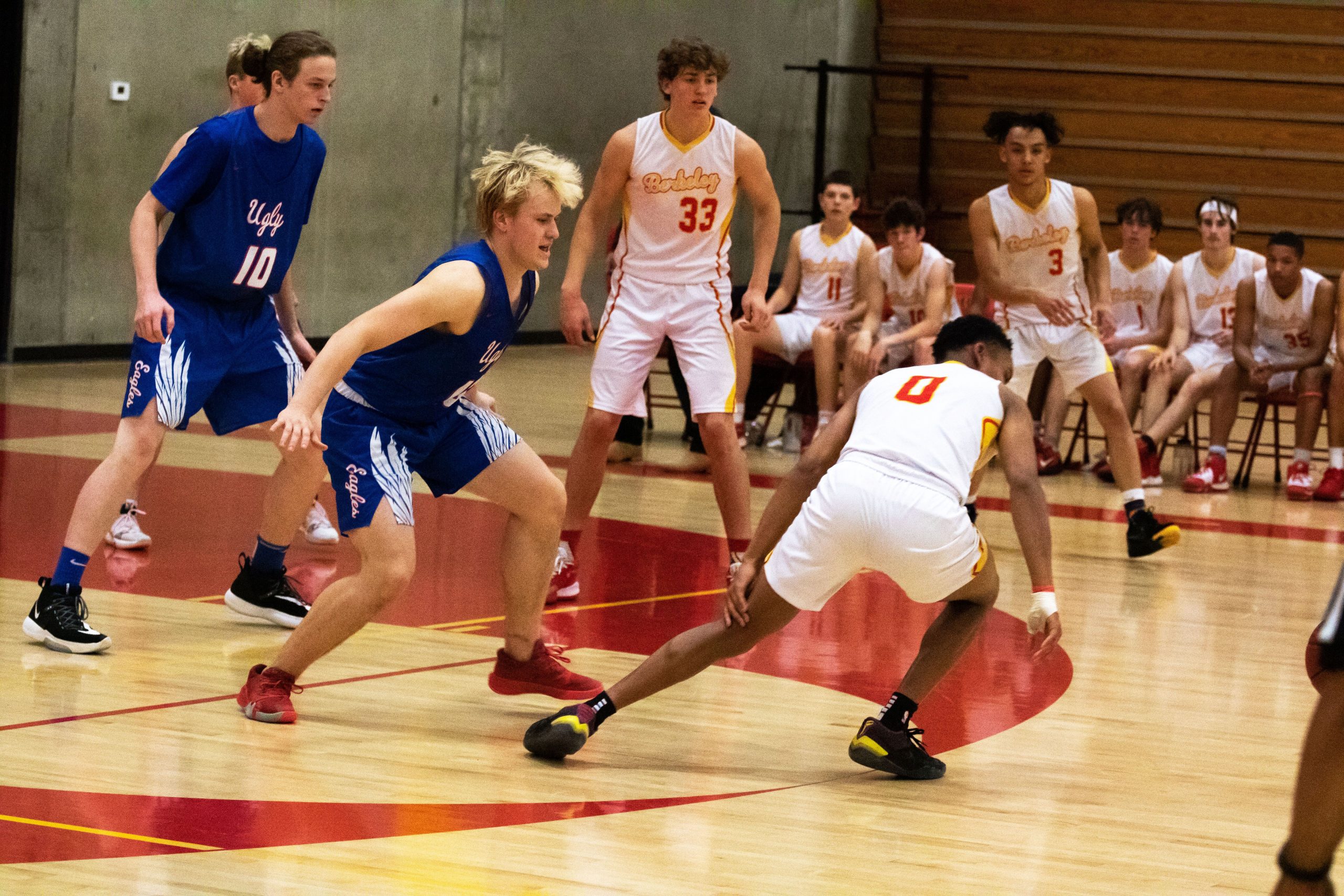 Junior Noah Millikan focuses on senior Jamir Thomas running toward the ball in a basketball game.

The Berkeley High School (BHS) girls’ basketball team performed similarly to their seasons in the past. They finished with eight wins and 18 losses. Despite having outstanding skill, there are only 13 players on the team, which means each player had to play for a substantial amount of time, with little rest. This also doesn’t leave a ton of room in the roster for player development, and it means the team is negatively affected when players are injured or can’t play. They had an outstanding offense, scoring far over the national average points per game. Unfortunately, their teamwork left some to be desired, with an average of just three assists per game. Next year, they will lose five of their 13 players. This leaves a lot of room for new players and team development, so next season looks rather promising.

This year, BHS boys’ basketball finished their season with an 11 to 15 win to loss ratio. They won four of five home games and two of five away games. This year, the team got a new coach, JJ Frazier, and he led them to a 46th place finish in the North Coast Section (NCS), and fourth in the West Alameda County Division. They show a lot of promise for next season. Seven players on the team will graduate this year, including starting point guard and captain, Jamir Thomas. Thomas has done an impressive job at leading his team, despite a changing program. Unfortunately, they lost their final game against BHS’s rival team, Bishop O’Dowd, with a final score of 92 to 64.

Boys’ wrestling has had an unbelievable season this year, with five of their eight varsity players winning more matches than losing. Although wrestling is an individual sport, as a team BHS placed third in their conference, the highest the team has placed in years and an all around impressive record. Seven boys qualified for NCS championships this year, the most players from BHS to do so in over ten years. Along with this, two of the boys from the team became conference champions. This has not happened at BHS for over eight years. Many players attribute this newfound success to the coach of the team, and BHS teacher, Ben Nathan. This season will hopefully set a precedent for BHS wrestling in the coming years, leading to a very strong program.

Girls’ varsity soccer had an equally amazing season, with 15 wins, four ties, and three losses. They also finished first in the West Alameda County Division and are going to the finals for NCS. They entered the playoffs stronger than ever and were ready to take their season as far as possible. Of the 26 Varsity players, just eight will be graduating at the end of this year, leaving much room for development from underclassmen. Their success this year is largely due to the great relationships between all of the players, both on and off the field. This team’s chemistry is unmatched, and their skill is just the same. With seasoned coach Alejandro Mendoza at the reins, this team performed strongly in their league season and NCS.

The BHS boys’ varsity soccer team has so far had an outstanding season given the standard of winning they had to live up to. This year’s team is entering the playoffs with 14 wins, four draws and four losses in the regular season. 12 out of 28 of the players are graduating, leaving room for stars from the successful junior varsity (JV) team to move up to the varsity squad. The team finished first in the West Alameda County Division and are going to the NCS finals. This is largely due to their outstandingly coordinated offense and stellar midfield. This season, they averaged two and a half goals per game, and almost all of their goals were assisted. This team showed superb teamwork this season, with a majority of possession in every game. Led to the playoffs by manager Stace Wright, BHS boys’ soccer is ready to make an impact on the league.

Junior Noah Millikan focuses on senior Jamir Thomas running toward the ball in a basketball game.