WSU Presidents Talia Glass (left) and Esme Segall (center) have a lunch meeting with club members to discuss a proposal for a new bathroom pass policy.

Berkeley High School’s (BHS) Women’s Student Union (WSU) is leading the fight to change what they believe are discriminatory bathroom pass policies. For years, several teachers at BHS have incentivized refraining from bathroom use in exchange for extra credit points as a way to minimize class disruption.

There is no official bathroom pass policy at BHS beyond the rule stating that students are not allowed to leave class to go to the bathroom during the first or last ten minutes of class. This rule is in place so that students do not miss crucial instructions, wander the halls for extended periods of time, or disrupt teaching time. Beyond the ten minute rule, each teacher can decide on their specific bathroom pass procedure. Many simply hang a pass at the front of their room and let one student use it at a time. Others give out a limited number of bathroom passes at the start of each quarter or semester, and accept unused passes for extra credit points.

Students who menstruate are more likely to need to use the bathroom passes, so the use of an extra credit based policy, the WSU argues, gives males an advantage because they

are less likely to need the passes. Consequently, males will have more extra credit points, which boosts their grades. Talia Glass, copresident of the WSU, said, “Teachers can find a different way to implement extra credit — just not through the control of their students’ bodily functions and needs.”

The WSU has compiled a list of teachers that use this policy, have met with the administration, and are set to start contacting teachers. Glass said, “We met with Principal Schweng not too long ago and drafted a policy to be sent out to all staff, and hope to be meeting with her again soon to solidify plans.”

While complaints about extra credit bathroom pass policies have been prevalent for years, they are resurfacing now, Glass said, because, “teachers are unlikely to change policies without a real push from both students and administration.”

David Goodrich, a BHS math teacher, has been using the extra credit policy for over ten years. He gives students a paper with four bathroom passes for use each semester that can be turned into extra credit if not used. “I just wanted kids to stay in class, do work, and think about whether they need to use the bathroom,” said Goodrich. “I was also having some kids use the restroom more than I thought, so it was just a way for me to get them to think about whether they were using the bathroom or not,” he continued. Goodrich said that students leave his class much less as a result.

Goodrich’s concerns are valid, and they align with many teachers’ at BHS.  Most educators would agree that students leaving class unnecessarily is not beneficial to their learning. However, many female students feel that a policy rewarding those who don’t need to go to the bathroom is unfair and restrictive.

Goodrich is the math teacher for Avery Nudel, a BHS junior in Academic Choice (AC). Nudel said: “I feel that there is constant pressure on me. I am always thinking, ‘I don’t think it’s worth [going] because I need those extra credit points. I feel nervous a lot of the time because by using my passes, I am losing extra credit points.’”

The extra credit boost may result in a significant change for students with borderline grades, like a 79 or 89 percent. The points can be extremely critical, and can equate to the difference between getting a B over a C or a B over an A.

Nudel said that one of her main concerns is when female students potentially run out of passes. She believes that many female students would be  uncomfortable asking to use the bathroom if they have no passes left in an emergency. The concern is that some teachers may not understand the severity of the situation.

“It is clearly a sexist system. I feel that any teacher that enforces something like this is not giving [women] the chance to take care of themselves.”

In response to this, Goodrich said, “I sympathize with them, and they can use a health center pass and go take care of it that way if there’s something they need to take care of. But I think the positives outweigh that.”

Nudel explained, “It is clearly a sexist system. I feel that any teacher that enforces something like this is not giving [women] the chance to take care of themselves.” Nudel said that this can be tied to what she believes is an ovearching societal issue, “Looking at the bigger picture, we aren’t going to get anywhere in society in terms of helping women and helping feminism if we don’t start with the small things like this.”

The WSU at BHS is still in the process of brainstorming more bathroom pass procedures that will not make people who menstruate uncomfortable or discriminate against them. These possible ideas include a sign-in/sign-out sheet to monitor how long students are using the pass, and possibly being able to mark if a student is on their period. Nudel added that she suspects most female students would not want to share that information, but it would be a way to avoid penalizing students for using the bathroom.

Glass said that Principal Schweng was open to discussion right away. Schweng said, “I strongly believe that bathroom use should not be tied to extra credit, or to grading in any way.” Schweng shared that she has “talked to a number of students who have had to experience the choice between using the bathroom or getting extra credit toward their grade in a class. In particular, for students who are menstruating, or with any sort of medical condition, this just seems like a choice they should not have to face.” Schweng hopes to share proposals regarding this issue with teacher leaders next semester. 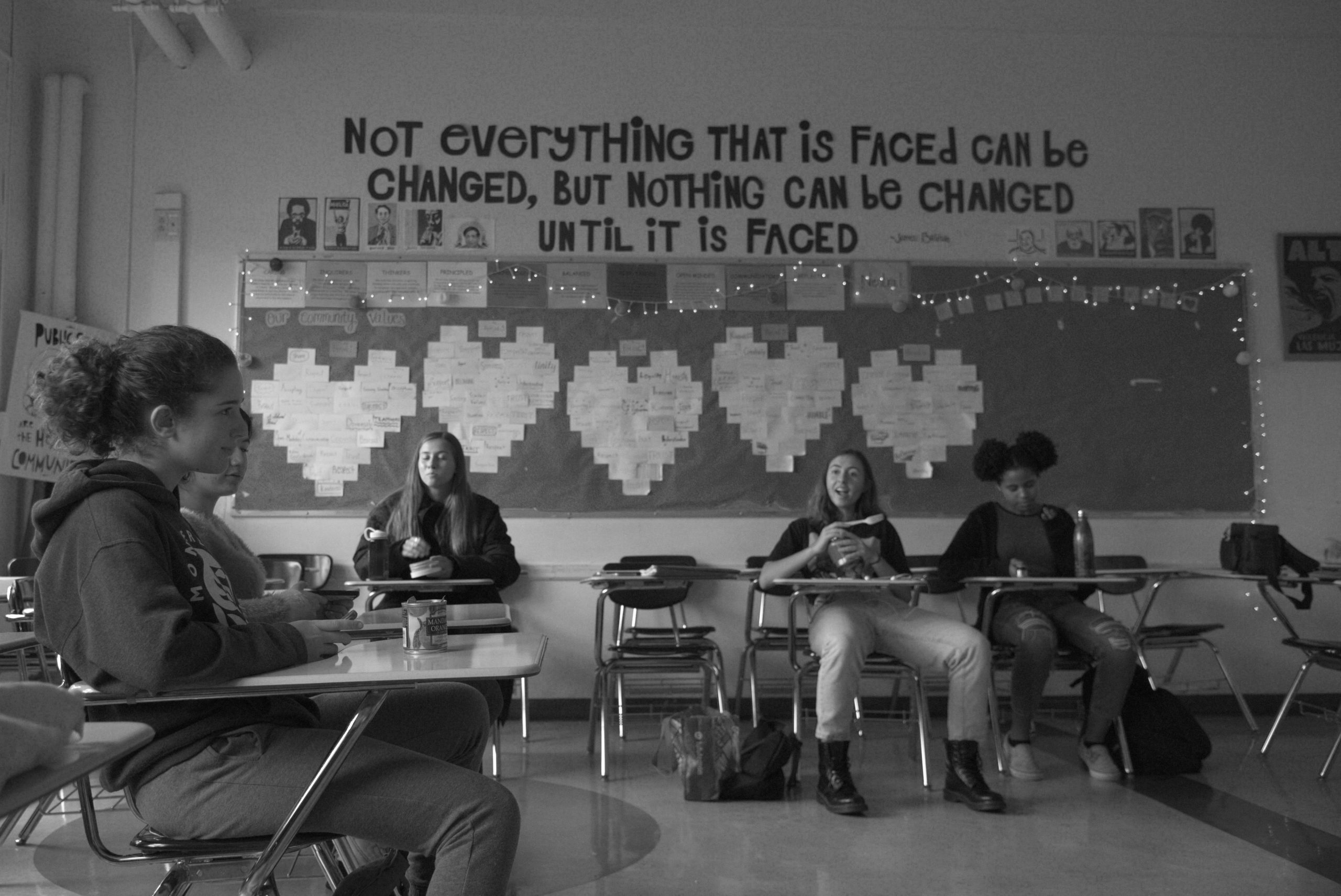 WSU Presidents Talia Glass (left) and Esme Segall (center) have a lunch meeting with club members to discuss a proposal for a new bathroom pass policy.